Posted on November 29, 2018 by recomcomputers

What the guy did was buy a mirrorcast adapter and used his $1200 ipad as a second monitor from another overpriced mini.  He did not load OS10 on an Ipad.

If you want a touch computer and everyone does, don’t buy Apple.

For years, one of the biggest desires among iPad owners has been for it to run Mac software.

The iPad is an excellent device for doing things like watching movies or reading books, but a handful of limitations keep it from being a real work computer, mainly that it runs iOS instead of a more robust desktop operating system like Apple’s macOS.

Apple insists that iPads and Mac computers will always be separate devices and that we will never see desktop software on an iPad. Apple’s Craig Federighi, who leads software efforts for both Mac and iOS devices, told Wired earlier this year that he was “not into touchscreens” on PCs and doubts he will change his mind.

But thankfully there’s a way to experience macOS on an iPad, even without Apple’s blessing. The YouTuber Jonathan Morrison said he saw this unique setup “hit the internet this week” and, after trying it himself, filmed how well it works, for everyone to see.

Here’s how Morrison made macOS run on an iPad Pro — and how you can do it too: 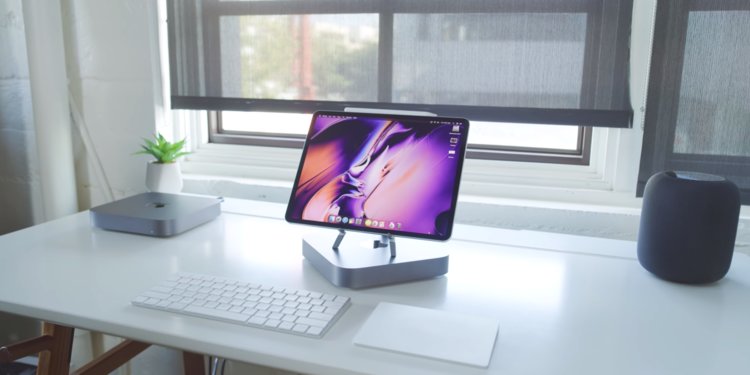 All of macOS — from the Finder to apps like Safari and Final Cut Pro — still works on the iPad Pro with this setup. And iPad-specific functions still work too, including the touchscreen and the Apple Pencil.

It seems like magic, actually seeing a functioning version of macOS running on an iPad.

It’s all made possible by the Luna Display, a tiny compact adapter that turns your iPad into a secondary display. It was designed for MacBook Pros or iMacs, but it works with the 2018 Mac Mini too.

The Luna Display, which costs $80, has two variants: one that works with USB-C, and one that works with DisplayPort. It’s important to buy the right version. You need to use your computer’s native port, as this will not work with a dongle or adapter. Also, this will work only on Macs, not PCs.

You can buy the Luna Display here »

This also means you can finally use your iPad with a traditional keyboard, trackpad, or mouse.

You can even use Apple’s own Smart Keyboard for iPad Pro, which gets its charge from the iPad itself and connects to the tablet magnetically. It’s incredible how both iPad and Mac functions all still work with this setup.

Still, Morrison warned against buying an iPad Pro just to use it as a monitor for your Mac Mini. “If you happen to have both, then it makes sense, because the adapter itself is relatively inexpensive,” he said.

The main limitation of this setup is your WiFi connection. If you don’t have speedy internet, you may experience a poor and laggy connection between your Mac Mini and your iPad Pro, which sounds like a bad time. The Mac Mini and the iPad Pro must be connected to the same network for this to work.

There are a few other drawbacks. Audio doesn’t come through the iPad Pro; it will still come through the Mac Mini. So you’ll probably want to connect your Mac Mini to external speakers, or headphones, or maybe even your HomePod, which Morrison said worked surprisingly well here.

The other issue is that you need an external display to connect these two computers in the first place, because you’ll need a monitor to set everything up.

In order for this to work, you’ll also need to use your iPad Pro without a password, or be good at typing your password without seeing what you’re doing, because you won’t have an opportunity to see what you’re typing until your iPad is actually on. (This is because the iPad is acting as a display in this setup, not as your main computer.)

Still, Morrison said this setup “works way better than I could have imagined.” To prove his point, he showed Final Cut Pro, Apple’s high-end video software for Macs, running smoothly on his iPad Pro.

While this setup has some obvious limitations, it gives you an idea of how well Mac software might work on an iPad, since this particular iPad Pro was running Mac software like Safari and Final Cut Pro using a traditional mouse and keyboard, though the touchscreen (and Apple Pencil) could still work too.

It’s incredible to see it all actually perform the way you’d want it to, with no apparent lag, even though this type of iPad ability isn’t officially sanctioned by Apple.

I’ve owned an iPad since the third-generation model, the first with a Retina display. I upgraded to the iPad Air when that was available, and I tried upgrading to the most recent iPad Pro, but I sadly returned it less than 24 hours later because I felt it wasn’t a good work computer for me.